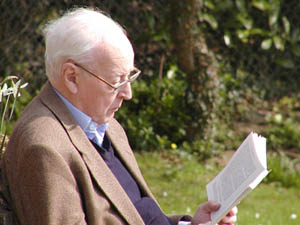 Sadly, I have to inform you that my father Nares died on Wednesday. As many of you will know he had been becoming increasingly frail in the last 3 or 4 months and of course at 94, his death was certainly not unexpected. It was also what might be called a good death in that Nares didnt suffer any dreadful pain or discomfort and he was surrounded by his closest family: myself, husband Gordon, brother Jonathan, my children Liam and Seran and  as it happened  her daughter Biba, who was asleep in her buggy. He was also wonderfully well-cared for in his last days and hours by his excellent GP, his palliative care nurse and the fantastic staff at The Meadow where he has been living for the last 4 ½ years.

Nares Craig was born in 1917 in the week of the Russian Revolution. He was educated at Charterhouse and Trinity College, Cambridge, and served as a captain in the Armoured Engineers in the 1939-45 war. While commanding tanks adapted to carrying special assault equipment, he re-designed the Bailey Mobile Bridge to increase span capacity and reduce operating casualties. After qualifying as an architect, he worked at the UK Building Research Station on investigations into housing design, production and erection processes, which were recorded in over fifty technical publications. This work resulted in invitations to lecture in various Third World centres, and later to the development of the low-cost Brecast system which was used widely in earthquake- and hurricane-prone areas. He thus gained first hand experience of the harsh realities of lives both in the villages and shanty towns, particularly in Latin America and the Far East. In 1984 he wrote Preventing the Holocaust.

In 1997 he wrote Alternative World. The book was first published by Housmans Bookshops Ltd. He has now decided to publish the book on the internet in order to make the book available to the widest audience possible. Alternative World - Nares Craig

MEMOIRS OF A THIRTIES DISSIDENT